Věra Chytilová’s Sedmikrásky (Daisies) is a 1966 Czechoslovakian allegory that explores the need for a new postwar experience… but the story is told in a magical postmodern whirlwind of feminine power, fearless consumption, and beautiful framing effects. This “madcap and aggressive feminist farce…the most radical film of the decade…(is a) liberating tour de force (that has been called) subversive, bracing, energizing, and rather off-putting (if challenging) to most male spectators” (Rosenbaum, Schneider). Rife with symbolism that delves deep into gender, sexuality, and geopolitics – but can easily be enjoyed on the surface as a whimsical escape from reality – the fun life we lived through the eyes of two girls who shared everything in existence is an artistically cutting-edge fun romp in a new world molded from the clay of reality.

I watched Sedmikrásky on Criterion Eclipse.

This is one of the bigger surprises of the year in movies and one more amazing film that I am so happy to have experienced. I knew little of this film prior to watching it, but I did recognize many snippets of it from some strange Internet gifs with Hal-Ashby looking shots and colors and some beautiful subtitles underneath: 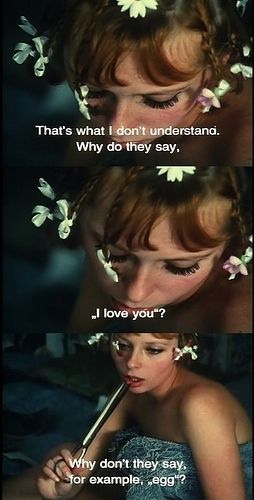 This film captured a great deal of everything that I love about the films of Hal Ashby and Wes Anderson, the style that seemed to be prevalent in the era that was similar to early Sesame Street, and the writing and synthesis of big ideas in a simple way that reminded me of Samuel Beckett’s strangely poignant nonsense with a message. This film’s gorgeous experimental style broke the mold on just about everything that I have seen in film – and honestly the directors I mentioned that use these visual tropes all came after Daisies… So it is no wonder that one viewing of this piece can spark inspiration in a filmmaker’s work that can follow them throughout their career and is something I absolutely love.

I wish I was more culturally competent about the context of the piece, because while it is easy to watch on the surface there is no denying that it holds a great deal of political capital in hundreds of ways – including the banning of the film, the shunning of the director  Věra Chytilová, and the virtual disappearance of the film for decades. I know that I am not getting the entirety of the message as someone who has not lived in Czechoslovakia at the time, as an American in 2016, and as a man, among others. Still, Daisies captivated me. I look forward to many additional viewings to try to explore what  Chytilová was doing in this seminal piece.

The wanton performances by  Jitka Cerhová and Ivana Karbanová as the two Maries were completely enthralling – as they were able to convince me that they have known each other their entire lives in a manner that I have never seen captured by any two performers. I thought that this must be what a true feminist sisterhood friendship is like, and if it isn’t, it certainly has me nostalgic and wishing for whatever it is.

This film is worthy of viewing after viewing, a gorgeous symbolic masterpiece that is fun to get lost in.

I am a writer, and teacher of writing and literature. MA, MFA. I enjoy cycling, gardening, playing music, and books. View all posts by Garrett Zecker